I release some days ago a new track named “Bots”. I was playing with Sunvox and some distorsion effects. In the same time, I had another composition exercise. Those two approaches where very differents I try to found a way to make them sound together, and here is “Bots”. For the melody, I had to find four chords in the same scale so I could write a short melody. After trying some I choose a A minor scale. For the screeches, which make me think of mad robots, I use a native sunvox distorsion module and play 2 notes.

Today, I am more confident with my music skills. I know I have a lot more to learn. I’m having piano/composition courses once a week that help me a lot. Now I can continue the game which has been suspended for too long now ! So next time, I’ll be able to show more about the light puzzle. I plan to add better light path representation, better controls, all components working and victory condition !

So see you next time !

I’ve just released a new track named “Quest”. It was at first a composition exercise. I had to find 4 chords, play them 4 times at same interval. Later I had to find a melody based on the chords. The track begins with that exercise, after that I try to go further by adding some drums, some bass and a new lead melody. I Hope you like it !

find all the tracks on this page

I finally decided to spend time on what is now my 5th track named “Journey”. You can listen to it on my Soundcloud profile or on my track page. This track came from an idea I had when doing the puzzle lock soundtrack, with slow and smooth instruments. As I also really love Monotron Delay, I reuse some of the sunvox emulation I made earlier in Space Delay. I also learn a bit of FM with distorsion with a sound design from The Handle, I use a kind of big crash sound you can earn two times on transitions.

I’m happy to publish this track, because it was fun to make and because now I can now start for real the next part of Electric Mind Pulse game, the light puzzle !

See you next time for more information about it

I’m happy to announce that my first puzzle is finished ! Since the last article, I spent my time on music and music script. I added some events for sound effects. I also made a system which change the music when the signal is low. I made 4 music loops and a little transition. At last, I fixed a few bugs and try to improve the gameplay.

It is the first time I work on all parts of a game, even a little one. The graphics are procedurally generated, as the game is based on a UI, it fits well. Music and effects are made with sunvox and Bfxr. And of course, programming is made on Unity. You can listen the puzzle lock music on youtube and soundcloud.

I hope you like it. Let me know what you think about it ! In my last test I reached level 28. 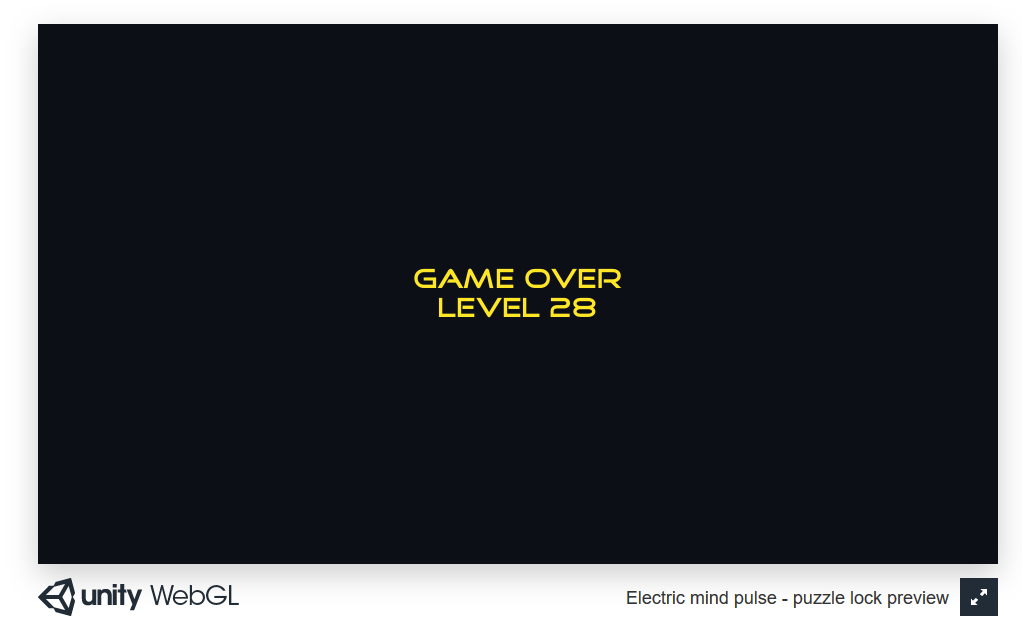 From now, I will work on a second puzzle, light or energy, I don’t know which one for the moment. While I was composing music and sound effects, I put on stash several ideas. I may compose a new track before starting working on the next puzzle.

The kind of music I like the most is alternative metal ! Which doesn’t sound exactly like the tracks I do on Sunvox. I promise to myself that the 3rd track would be “industrial”. I’m happy to share my 3rd track, Space Delay, you can find right here and that doesn’t sound metal at all :

I didn’t plan to make a new track now, but I was tweaking my monotrons and got the main idea of the track, a simple melody with an LFO varying while playing with a space delay. I try to make it sounds in Sunvox, here is what I get :

I added drums, it was a bit difficult to found a rythm that follow the varying LFO… After that first step, I wanted to dig the idea. I fixed and improved the main idea. I added another instrument to introduce the effect with the monotron’s like “delay square pitch LFO”. Kind of hard in Sunvox, because it is not natively possible, but this kind of feature is first on the TODO-LIST. I also fix the end of the main theme which sound better now.

The next step consisted of adding a 3rd part, with the main theme but with a different kind of drums and a bass line. That allowed me to introduce the end of the title and try to make a drop. But the drop sounded more like the end of a track rather than … a drop !

So, I try something else and find another drop which sounds better. I share the tracks with some friend, listen to their advices. I fixed some little things I could and here is the track !
I’m not really happy with Space Delay’s drums which doesn’t really fits without having an idea of how to solve that ! I’m not really confident with the progression, it sounds like there was two tracks sticking to each other, but anyway I think this is interesting enough I’m proud to share it with you.
Thanks for your attention. Next time, I’ll show you the first prototype of Puzzle 3 chests e-locks.

I listen a lot of music, but I never played nether try to make some. However, it is an import part in a video game, it must not be forsaken.

I wanted to know if I could handle this part of the job, so I began to learn. I started from the ground, with sound synthesis. Then, I slowly made my way to composition. It was a tortuous path. I take a break with the Viznut experimental approach, how to make music (or sound structure) from very short programs. Even if the results could be amazing, it is really… experimental ! Though I love this kind of experience, it can be difficult to listen to. After some evenings trying to make my own formula, I had to be obvious ; It was not magic and I would’nt make it without a little serious learning.

After some times looking for a software that fits my needs, I found Sunvox made by Alexander Zolotov (nightradio). This tool can look strange at first, but it is a real crossplatform tool. I installed it on differents computers, and mostly on my smartphone. Even if it is not free on mobile device, it is worth it ! I could try what I learned everywhere when I got some times. I listened to a lot of electronic music, chiptune and study some technics. I made some trash but now, I have my first two shareable tracks. I’m still learning, but now I am more confident with my ability to produce some tracks for a video game.